Of life and death and synchronicity

Philibert (you can read about him here) died last Friday. It was a shock, he always had some small health issues but things took a turn for the worst and he  was gone in 3 days.
Philibert was extremely cuddly and dominant...meaning he didn't let the other cats much room around me, though he was rarely attacking them.
He was a tiny little cat with rabbit like fur that always smelled like a baby. He loved cat treats (he could hear them from miles away), milk and belly rubs. He slept cuddled near me which gained him the nickname of "Little Spoon" (also, in French, little spoon is "petite cuiller" which rhymes with Philibert).
He was also always extremely energetic, making me forget he was in fact an older cat and not a kitten.
I still can't wrap my head around the fact he is gone.
Now, we all deal with death and grief in our own way. I have had a lot of practice at losing pets and people so I know what works for me.
I am a nerd, I read books. When I am upset there are 3 subjects I enjoy reading, philosophy, quantum physics and UFO's. 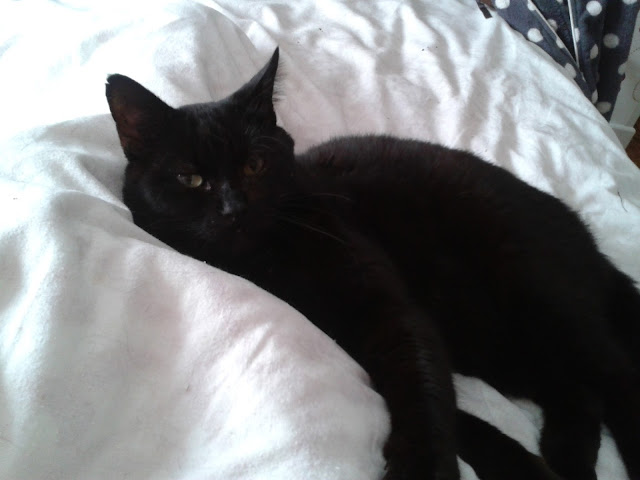 Last Friday morning I was reading  about synchronicity and conscience and the links they could have with quantum physics. "Synchronicity is a concept created by psychiatrist Carl Jung, which holds that events are "meaningful coincidences" if they occur with no apparent causal relationship, yet seem to be meaningfully related" (Wikipedia).
In short, they are no coincidences.
Shortly after I brought Philibert's body back from the vet, I started playing my current favorite video game, Animal Crossing New Leaf. If you're not familiar with it, it's game in which you're the mayor of a small town where you can collect objects to furnish your house and interact with the inhabitants. Occasionally they will give you objects, though usually you have to buy or trade for them.
Last Friday, one of the computer generated characters came to me and gave me a black cat.

Out of the thousands of items in the game...

Later that day I decided to replace a watch battery. The watch had been lying there, opened on the workbench for weeks. I placed the new battery in, checked if the hands were moving and closed it. Then I was about to set the correct time...only to find out it was already set to the exact correct time...

So I guess the universe was telling me it was Philbert's exact and correct time to go.
Posted by Nathalie at 1:47:00 PM

First of all, i'm really sorry to hear such sad news! I also have a black cat and she's really old now (she's about 15 - 16 years old and her once pitch black fur is half white), but i don't even want to imagine how it would be like without her.

I think we always tend to search and find hidden meanings in trivial events, but i never thought of the possibility of actually not being just coincidences. This is really food for thought.

About evebnts that happenned - nothing happennes without a reason even if we don't know the reason.....

About coincidences I'm very skeptical. I think the human brains automatically will search for clues and meaning in any event, and pick them out to reinforce his feelings or recent events.
Besides Jung thought this up to justify some paranormal events, which is the wrong way to go (you observe, try to understand and make theories that fit the general scientific state). And should I add he's not a scientist but a psychiatrist?
But whatever makes you happy and if it is believing that coincidences don't exists, be my guest :)

First of all Dina I am sorry for your black cat! :( It's really sad!

It's interesting how things seem to have hidden messages. I don't belive in coincidences either, so I think some things are connected but we lack in seeing the connections and our brain is having an "alarm system" to let us know that's something there. I wouldn't go this far into saying that supernatural things can happend,I am referring here in usual coincidences like bumping into the same person twice at the supermarket :)

And hugsss for you!

So soory for your loss Dina.
Regardin coincidences I am also skeptical... but some times are astonishing!

I'm sorry for your loss, Nathalie.
I am a bit like Stephanie, it is some kind of search, but yes some things seem un-explainable or very peculiar.

I personally don't believe in coincidence. I do believe in an event causing a change in your life. Even if it's something small or something that could've happened yesterday or tomorrow. It'll have a different change if it was yesterday than it would've today. Or even an hour earlier. If your cat died last week or was still alive, your life would've been different.

Despite not believing in coincidences, I do like the things that happened that day. Because you looked at it differently. You might've gotten the black cat anyways, even if your cat was still alive. But now you gave it meaning and I think that's stronger than a coincidence. :)

I do hope you understand what I've been trying to say, haha!

Very sorry for your loss, Nathalie... I once lost a black cat named Baghy, and I still miss her very very much.

Interesting concept about synchronicity, I guess the bizarre events were a good way to acknowledge what your subconsciousness was already knowing. It was a loved cat and it was her time to go, it is better that her sufferance was not long.

And I think synchronicity and coincidences exist :)