My old little Gazette went over the rainbow bridge yesterday.
It feels odd. Gazette was at least 17 years old. He arrived in my life in 2000. You can read about him here.
That's 16 years together, that's a long time. I took for granted he'd forever be around. I always suspected Gazette was one of the "Little People",one of the faeries, who  for some reason decided to live among humans for a while.
I always thought he'd just disappear one day, just the way he suddenly appeared...or maybe that he'd vanish into thin air like Yoda in Star Wars. 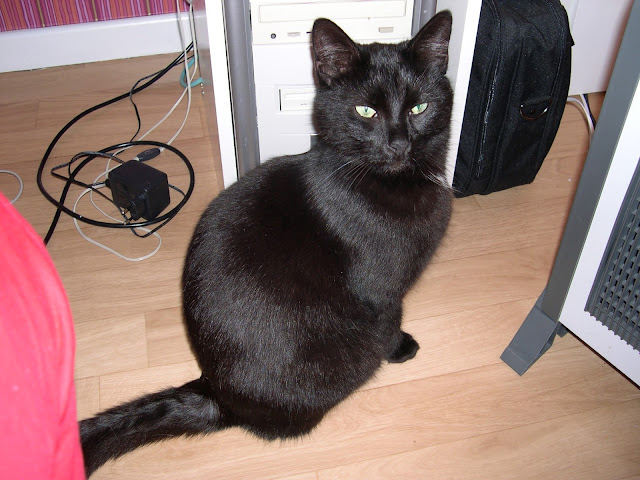 Of all the cats I've met Gazette was the most unusual... His appearance would change a lot...sometimes he looked a lot like a black fox.
His unusual name, which was picked by accident, turned out to have a famous predecessor...the Cardinal de Richelieu (yes, the one from the 3 Musketeers) loved cats and he had one named Gazette.

Gazette had lots of little habits...he loved to suck the end of his tail, to have his nose booped and rubbed. He loved being wrapped in a blanket, papoose style. He loved cakes (especially lemon) and muffins and all pastries really. He'd need to taste all my food.

He'd sit on my lap for pretty much every meal, just sitting and looking...not trying to steal any food 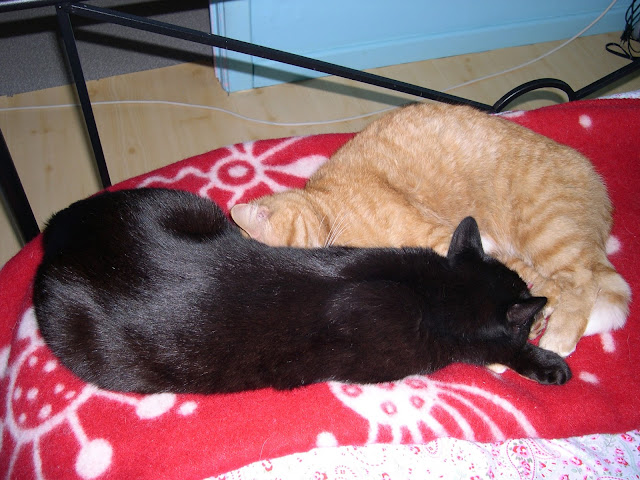 At one point of his life, Gazette became a mom. Yes, he  was a boy but he decided to adopt a feral kitten, Elvis. It was kind of unusual to see an adult male cat grooming and looking after a kitten. The 2 stayed very closed until Elvis's untimely death from FIP. 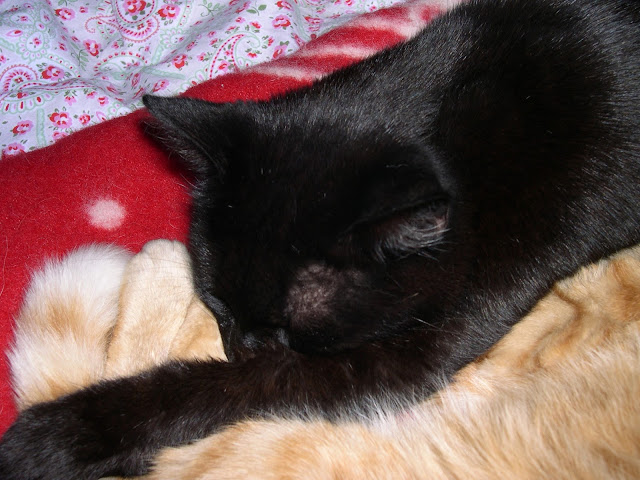 When we were still at the old house, Gazette had lots of people friends...he'd go visit several neighbours. Some were sad to see him move.
He would never miss a chance to do something odd...like that time he reeked of lavender perfum. It took me forvever to find out he had been rubbing himself in a hard to reach house perfume. 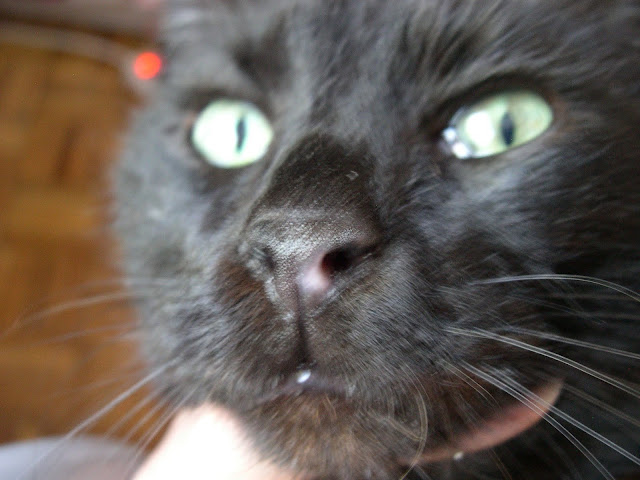 Though pretty much entirely black, he fancied himself a tuxedo kitten, thanks to about 10 white hair in his neck...and later in life a pink patch on his black nose after an injury.
He had the softest jelly beans you can imagine...like a newborn kitten. 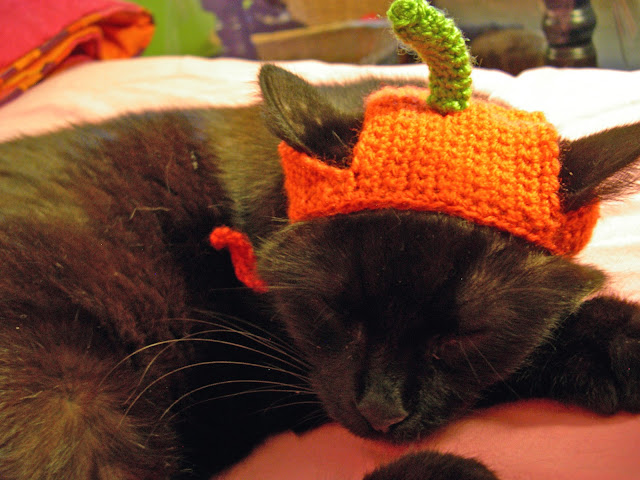 He enjoyed wearing hats and ribbons and badges...by badges I mean banana or kiwi stickers that he'd wear proudly like a boy scout.
As you can see he had a "hat head" :) 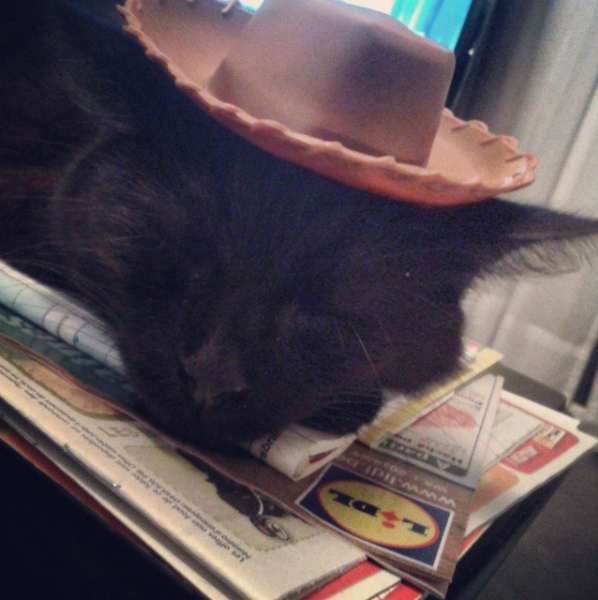 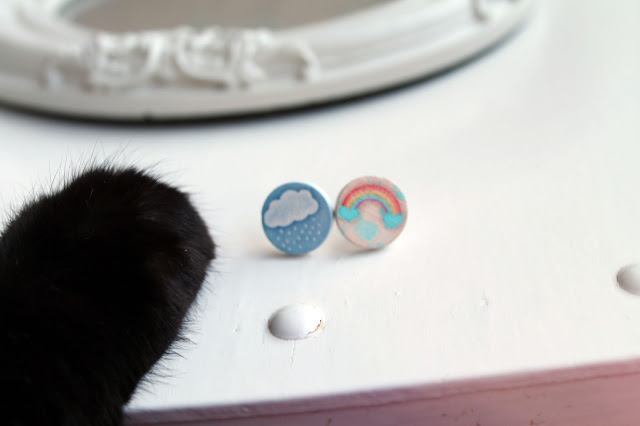 He would always help during photoshoot too. Because Gazette was always busy, he always had something to do. His big weekly job was to go check all the neighbourhood trash cans and bags...and pee on selected ones.
He was a cat with a job to do, and nothing could stand in the way of his mission!
He was never sick or unwell, he went to the vet for the first time 3 years ago to have a tooth removed...and again a few month ago when he health started to decline.
He was a cat of a few meows, for years I thought he was mute...but he purred a lot!
Gazette eating a blueberry muffin.
Posted by Nathalie at 11:45:00 AM

I'm so sorry for your loss. But I very much enjoyed your text about Gazette, it sounds like he was a great cat. I'm sure he was happy to have found you, otherwise he wouldn't have stayed.
Lots of hugs!

Aww Nathalie, such precious memories he gave you......and a male cat adopting? What a beautifully strange and wonderful cat! I am officially starting a protest, Kitty Heaven is full and all cats must stay here with us!

He sounds like a very interesting and loved cat, hope he is checking out cat's heaven neighborhood :)

Sorry to hear that Nathalie. Your text is so nicely written and shows how wonderful life Gazette had with you.

Sorry to hear Gazette has gine over the rainbow bridge. Great to read all your hapoy memories, hold them close. Big hug >°x°<

So sorry for you loss. Gazette looked just like my husbands cat, who no longer is with us either.
Big hug!

I am really sorry for your loss! It seemed a lovely fellow!