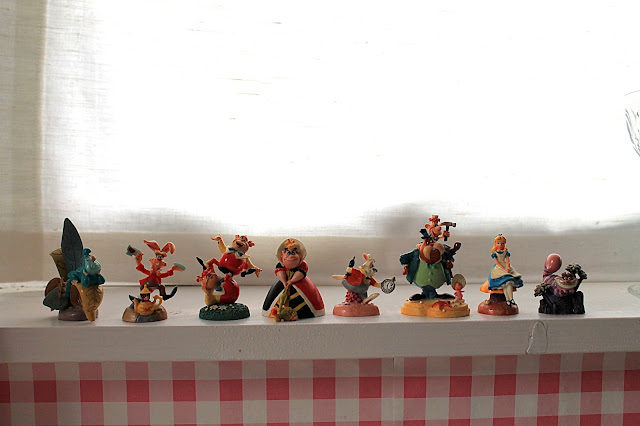 In late 1990's the American Disney Stores released one of the cutest figurine series, the Tiny Kingdom collection. The figurines are quite small (about 5 cm tall) but extremely detailed and pretty, making it one of my favorites. Unfortunately they're also incredibly fragile, 2 are broken...I suppose they were not really meant to be taken out of their box.
The Alice set had 11 figurines...I am missing the Mad Hatter, the Painting Cards and the Flowers.


The Japanese Disney stores later released a 6-pack set...I left them in their box this time, but as you can see, you can't see much ;)  The figurines were identical to the US ones.

Love them all! I never tire of reading Alice in wonderlands

Wonderful collection and very good picts, you can see all the details very well!!

Cute as a button :-)
Nice details, and would definitely get the unboxed, much more fun! Are they ceramic that they break so easily?

The amount of stuff/ collections you have is really something else :)

They are so beautiful! Great collection!

aaah YES! the disney store! We had one in Frankfurt and I LOVED it :D I was still pretty young and we would go with Mum there on the weekends sometimes.
Those figurines are adorable :)