NEW YEAR and a look back on a bad year 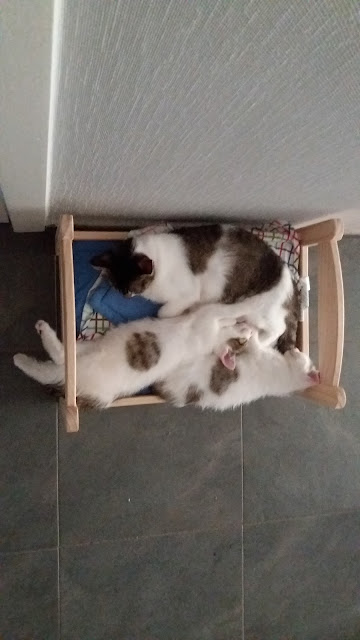 2016 was an extremely tough year. I lost so many cats  that I spent most of the year grieving. The passing of Pepita was is extremely difficult to deal with. I love that little cat so much and she left such a big gaping hole in my life...I  find it almost  impossible to find anything positive in that last year.
Fleur died in April, Gazette in May, Pepita and Daget in August and Bruno the Fabulous lost his battle against cancer only last week.
To try to fill the void they left, I adopted  new cats. Little Chloé was abandoned pregnant on a parking lot. She gave birth to 2 kittens, Pookie and Floki. I adopted the 3 the last week of September. They settled in fine...Chloé is still terrorizing the  poor Diego though. I have no idea why he is so scared of her as he is 3 times her size...and usually gets along well with everyone.
Bruno was a little jealous but he liked the kittens, he would eat with them and check on them. He was a kind cat.
The kittens are very rowdy. I've never had such destructive kittens before...but they are very sweet and do enjoy a snuggle or 2.
I didn't travel as much as I had hoped for. I only went to Scotland in August...when Pepita died. And it rained the whole time so the whole trip is just like a blur in my memory.
I got myself a day job...which is incredibly boring but pays well and is close to home...and it is fortunately temporary...so I make do.
My ear issues are just getting worse and worse and I ran out of doctor options.
But my shops did pretty well despite the lack of attention I gave them in the last months.
Financially I've never been this comfortable...but not being very materialistic, I'd happily give that away to get my kitties and happiness back :(
I hope 2017 is less harsh and that I get my drive back...because right now everything seems tough...too tough.
I hope I see more films this year, that I read more books...and that I start enjoying traveling again.

It's very hard to lose furry friends. Your cats are very lucky. Love them, they are very similar to mine, same colors. Love how they sleep in their bed!

Let all the bad remain in the past.
hi your cats convey my Ochkar and Murch

I know the feeling in 2015 we lost 5 dogs :( They do have a large piece of your heart!
Glad that you adopted new family members!

I'm sure this year will be better for you! Your new cats are very lucky, cat's adoption is a great thing :D

I wish you to find new happiness in 2017. It is true, that 2016 was very strange year, but the lucky 7 at the end now wounds promissing. Hugs and good luck.

Such a rotten year 2016 was for you. Loosing furry friends is hard. I do wish you happiness and travels for this year. Hugs!

So sad... I hope you find new friends, new places and new adventures in 2017!