Star Cat of the Day : Doudou aka Kevin aka Voldemort

I don't really remember how Doudou McBain became my cat...or rather how I became his human. Voldemort, his first name, just popped in the garden once in while. He seemed rather aggressive toward the other cats...but I am not sure whether he really was mean, or if it's just his imposing stature that made me think so. Yes, Voldy IS huge, a lot bigger than my other cats. He got his Voldemort name when the kittens flocked around him like little deatheaters ;) It was very sweet to see him being all shy around those tiny kittens. 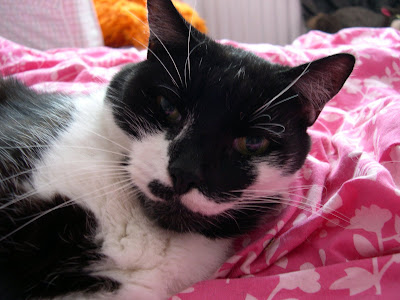 When he decided to stay around, he got his second name, Kevin. Why Kevin you may ask? Well, it's from a sketch from a famous Belgian stand up comedian. He has recurring characters named Kevin and Nathalie (my name). 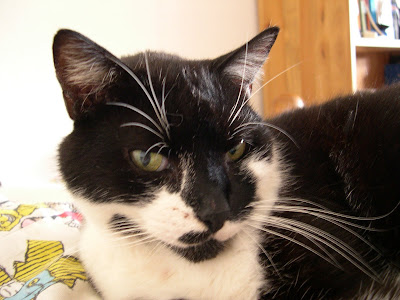 He got his third name, Doudou, when I found out he has no teeth left. My poor fearsome grumpy "little" Doudou won't bite you.
He kept his 3 names, and I use all 3 depending on my level of annoyance with him.
Doudou is very clingy, especially in the evening, when he just HAS to sleep on someone, and I can tell you it's not terribly comfortable to have that giant kitty on your stomach and lungs.
Posted by Nathalie at 11:12:00 AM

Nice to meet you mister Doudou aka Kevin aka Voldemort !

I like "Voldemort", perfect name for a cat.
Really :)

Even don't know which name is the best)) All of them suit him perfectly!

due to the fact the loves to sit on your lap, the most perfect aka is Doudou to me :-)

Oh what a sweet kitty, a "gentle giant" and a cuddly big boy!!! Love your Doudou/Kevin/Voldemort! My kitty girl has an official name, Zoe, but most of the time I call her Bibi! I think having more than one name, or an "official" name and a nickname (or more than one nickname) suits cats best as they are such complex personalities (we love them because of that, don't we?? :)))

Nice to meet your cats :)

What a lovely cat, such a handsome face! Much more handsome than Voldemort :-)

You-know-who? Well, unlike his HP counterpart, he does have a nose! :)