Star Cat of the Day : GP 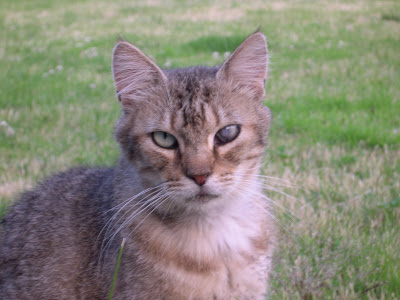 GP McBain (also known as Pounet) is the ultimate rescued kitty. GP stands for "grosses pattes" (big paws in French), as he has a strange disease that makes all his white cells accumulate in his lower limbs.
GP belonged to someone else but he occasionally came in the garden, I noticed him because he has a "bad" eye, he got wounded and it never properly healed. Obviously he was not much cared for . 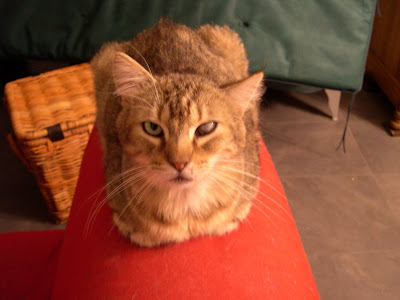 He looked nice enough, not picking fights with my own cats. Then one winter I noticed that he was in the garden a lot, and that he walked funny...so I tried to to pet him and catch him to see what was wrong. Poor GP not only had this uncurable paw problem, he also had coryza and looked really thin and...well about to die really.
So I took him in.
The vet was not very hopeful, on top of his various health conditions, he also had a broken tail.
Well, we are now 3 years later. GP has good days and bad days, he sleeps a lot...but he seems happy, "I won the lottery" happy actually ;) 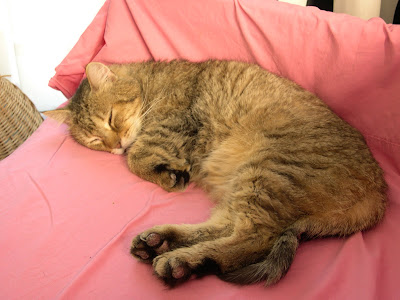 He eats well, and likes cuddles too...and he is the ultimate sunbeam napper :) But what I like best about him, is the way he looks at me with adoring eyes.
And the vet can't believe he is still with us!
Posted by Nathalie at 11:55:00 AM

Well, he DID win the lottery with you! :)

What an amazing story! So emotional... You both won the lottery :)

What a great story and cute kitty!
Thank you so much for sharing!

What a lucky cat :) And a lovely story indeed.

Great story! And he is just so cute!

One more wonderful story with a happy ending!!!! Thanks for sharing! I agree with Mysterious Cats: you BOTH won the lottery!!!!
A sweet cuddle and kiss to sweet GP!

What a fortunate cat! A real winner he is indeed :)

Oh wow, I love cat stories and this one is certainly a really nice one! So glad GP found a good home with you, he looks very content!

Such a lovely story and GP is adorable!

what a beautiful story, and with a happy end too. He looks very happy in the sun indeed !