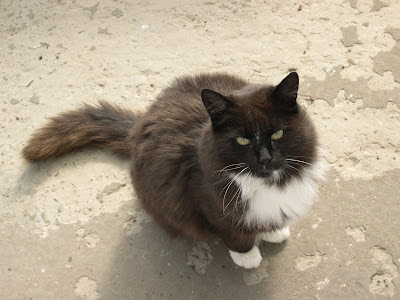 Pepita is the new addition to the family.
I had seen that fluffy cat roaming in the neighbourhood for some time but assumed he (I thought it was a boy) belonged to someone.
She was quite shy and would run away when I went out...then she started to come and eat the food I put out for an outside kitty.
And last February we had some unusually cold weather  and she wouldn't  leave the garden. 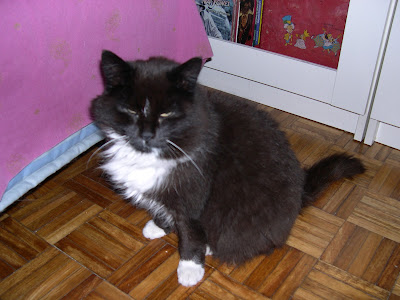 One morning she jumped inside the house and checked all the rooms, and then went quickly back outside.
But that night I found her leaning on the bay window, shivering and looking very miserable. I let her in and she immediately went napping in a basket in the study. 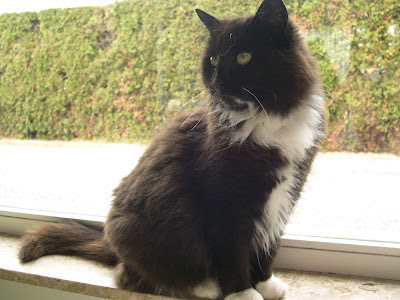 She didn't look too good. She was pretty dirty with matted hair that I had to cut. I took her to the vet and it turned out she recently had a  miscarriage and some of the dead fetuses were still inside her, rotting :(  She had some emergency surgery and a heavy dose of antibiotics...and now she is doing great!
Thriving really, must have doubled her weight by now. She eats a lot, loves ham,cuddles and warm radiators. She is also very bossy and a little bit possessive. She loves cuddling when I watch TV, putting her little nose right on my nose and making little "I love you " eyes.
Posted by Nathalie at 8:36:00 PM 9 comments: