2018 sucked.
I tried to think of a nice, stress free day this year...still searching.
Maybe I have died and this is my hell...

I can't think of a single thing I've done just for me, just to have fun.
I haven't been on any trip or little break...unless you count 2 hospital stays. And sadly I've realized that it's the longest vacation I've taken since I moved here...9 years ago.

At the beginning of the year I was so thrilled that my horrible dayjob was coming to an end. I had planned a little goodbye party...and it never happened as I ended up in hospital.
I didn't go out either...as I basically have no friends left. Mom is increasingly difficult to live with...and it's only the early onsets of  Alzheimer, she tolerated my friends before (not that she ever liked any of them...) and I could go away (and that's what I did most of the time, to be honest) but now it's really no longer possible. Maybe I shouldn't have given up...but it's really hard to live with someone who keeps being mean to everyone.
What is really scary, is that I  see no way out of this. I need a miracle now.
I lost Floki the Wild in February and my old Diego in June.
I didn't see too many movies...but some were really good. Here's my top 5.

5. Deadpool 2. So refreshing, a superhero film that is not politically correct.
4. Christoper Robin. It was really sweet and moving without being over the top.
3. BlacKKKlansman. A very serious topic, based on a real story (a black guy infiltrating the KKK)      but really funny. And all those cool afro hairstyles.
2. The Shape of Water. Such an unlikely topic. A mute cleaning lady helping a strange water creature      escape from an army facility.
1.The man who killed Don Quixote. I like all Terry Gilliam movie. This one is no exception. It       works on so many levels. The film in the film, that references a film that never got made.

I read some good books. My favorite was Kotori (Little birds) by Yoko Ogawa.

I haven't been watching many series (well, I still don't have Netflix). I saw Stranger Things while in Hospital, I kind of enjoy The Good Doctor.
I am more into Podcasts these days.
My top 8 for this year:

8. Ted Radio Hour (from the Ted talks)
7. Stuff to blow your mind (all kind  of scientific and historic nerdy topics)
6. Stuff they don't want you to know (a bit like the previous one with a conspiracy tone)
5. Last Podcast of the left (paranormal and scary real stories about cults and serial killers)
4. Le Bureau des Mystères (in French, paranormal topics)
3. Open Minds UFO radio
2. Podcast UFO
1. Mysterious Universe 2020 update: I canceled my subscription and have stopped listening to that podcast. The  hosts have become increasingly racist (well, I guess they always were but it just didn't show before), making fun of the disabled and the content went downhill reaaaaaally fast too. Give that podcast a miss.

Oh and I've started meditation with the Headspace app. I wrote about it here. 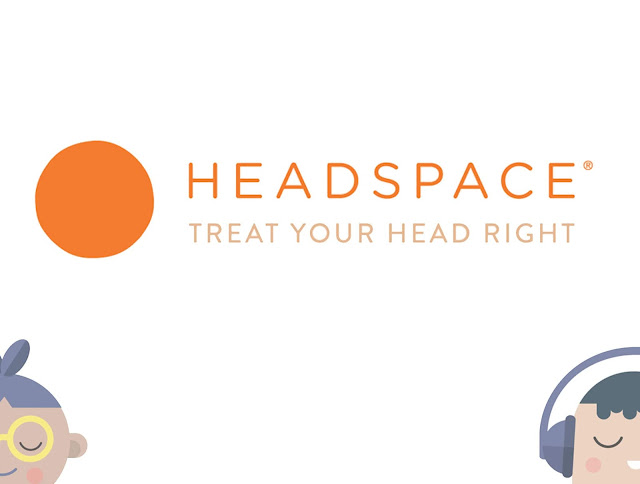 Along the years I have tried meditation several times.
It is supposedly good for all kind of things, including auto-immune diseases.  I tried several times with books by Matthieu Ricard but had trouble keeping practicing
Then last June, while searching for sleep sounds, I once again came upon Headspace. I decided to go for their free month trial. And I got hooked.
So 6 months later I still meditate pretty much every day, every night I should say. I know that the main purpose is not falling asleep but it’s the main effect it has on me.
The whole thing is very simple, the process is clear and you don’t have to achieve anything…just go with the flow really.
The app has cute little animations to explain the main concepts.
And they have really cool “sleepcasts”, which are probably my favorite thing and completely worth the subscription.
Sleepcasts are little audio stories with soothing voices and sounds (ASMR style). Sea, forest, garden, snow, river sounds. Every time you listen, it’s slightly different so it’s never repetitive.
There’s also a nice selection of soothing mix of music and sounds that I like to listen too when I read as it helps with my tinnitus.
There’s currently a New Year offer for a yearly subscription. But you can try the free month first and see if it works for you. It hasn’t changed my life but it sure helped me in more ways than one.


A couple years ago, I noticed a new app called Headspace was popular but guided meditation felt too much like a gimmick to me so I never  tried it, you know like those whale sound CD’s from the old days.
PS: I am not getting paid or getting any freebies for this blogpost.

The tree is up unusually early this year. It was pretty drama-less for a change.
I am not big on Christmas things...but at least pretty lights make the house a bit more cheerful!

I try to keep busy. I cook a lot. I have made Xmas pancakes (recipe here), banana bread, I tried a new butternut recipe - butternut squash with cuscus, oyster mushrooms, parsnip, the recipe called for nuts but I forgot - entirely and accidentally all vegan :) It was nice but way too much.

I haven't written my Holidays cards yet, not sure I will. Have only bought one present (for mom)...unless you count this Sugarpill + Little Twin Star makeup set I got for myself  on Cyber Monday (but haven't opened yet). I love that brand as it is vegan and cruelty free, and pretty good quality too (unlike most cruelty free, cheap,  makeup I usually get).
I am SUPER ready for the new year... (especially since we get a new Doctor Who episode on January 1st too).
Posted by Nathalie at 4:02:00 PM 4 comments: 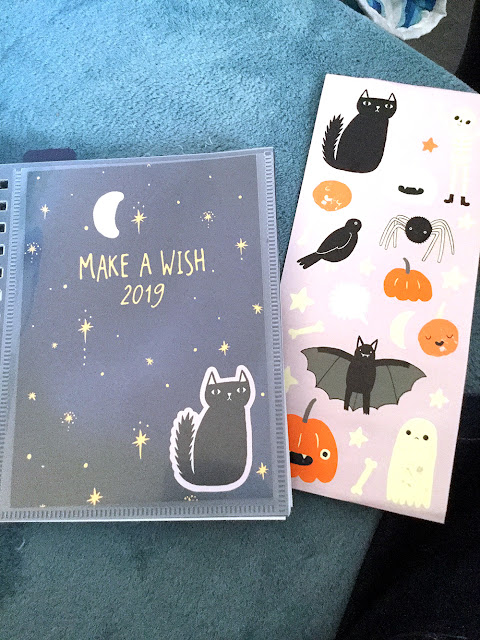 New stuff for me, not in the shops ;)
I got an agenda for the new year...and decorated with Halloween stickers (just because, you know...) Both agenda and stickers from Hema. 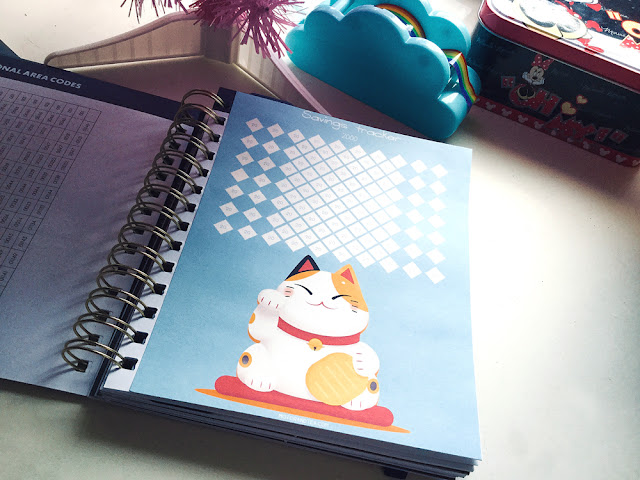 I added a saving tracker from Motor and Tea and stuck it in the agenda too. 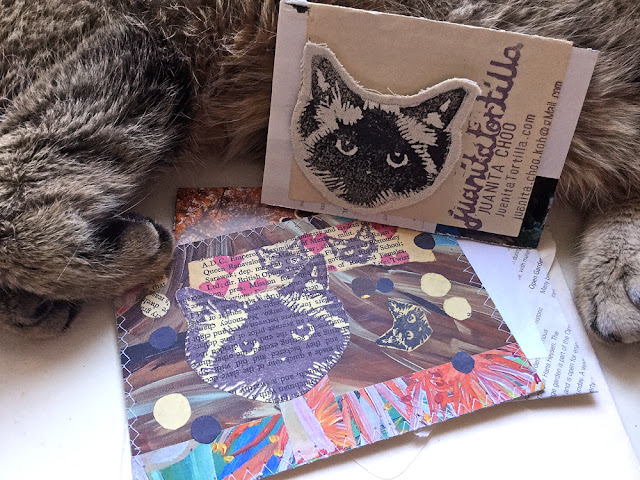 And I got myself a cat brooch and a card (for my remodeled bedroom) from JuanitaTortilla.com . Everything she makes is from recycled materials and everything is pretty cool!
Posted by Nathalie at 7:06:00 PM 3 comments: