Save lennox the dog

Some of you might be aware of the story of Lennox, the dog confiscated and imprisoned for 2 years by the Belfast city council.
You can read all the details of this sad story on http://savelennox.co.uk/
Now Lennox is scheduled to die on Monday. He never did anything wrong, he spent 5 years of his life in a loving family, no one ever complained about his behaviour. 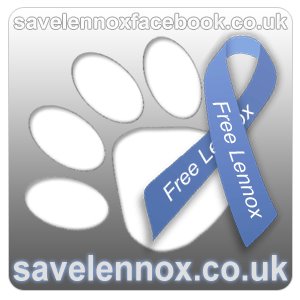 For some reasons, some people on the Belfast city council want that dog dead. Personal vendetta? Personal agenda? No one knows. This story is laden with all sort of irregularities you would not expect in an European democratic country.
Here's my letter to Ms O'Neil, the agricultural Minister:

I have been following the campaign to save Lennox the dog, I have heard that it is within your power to set him free to go and live his life out somewhere else. This poor animal has prayed on my mind time and time again and I will never forgive myself if I don't at least try and help him. I do not understand why this dog is classed as dangerous as all dogs have the capacity to harm if not brought up properly and in the correct surroundings and  it seems Lennox was taken from a loving and caring family.

The killing of Lennox should be postponed until the Belfast City Council has been investigated.It is not with a light heart that I question the authority of an elected authority, but the Belfast city council actions are dubious at best, they have clearly  abused of their powers here. This case has so many irregularities, so many questions NEED answers.

- Why is a warden , who lied in court, still working for the council?
- Why was the same judge allowed to rule twice in the same case, without ever hearing the defense nor allowing them to show their evidences?
- Why is the Barnes family NOT allowed to see their dog?
- Who is behind the threats and intimidations of the Barnes family and their supporters ? Are they the same people who "troll" forums, discussions and Twitter with elements from court hearings that were not divulged to the public?
- Why did the Belfast city council try to have websites and Facebook accounts supporting the Lennox Campaign closed?
- Who is behind the anti-Lennox website and campaign llaav.com? Is the Belfast city council using public money for their own agenda? That website is highly suspicious as it is hosted in the UK...but its IP is protected by an Australian privacy business "Privacyprotect.org". As you may know it is very unusual for a website not to disclose its owner and location.

To anyone who has been following the story, this looks just like a personal vendetta from the part of  a supposedly democratic council.

To tell you the truth, I think Lennox has been killed already, either through injection or through mere neglect. Why would the Belfast city council not allow Lennox family to see him one last time? Why won't they return the body to the family? What have they got to gain by acting so cruelly? What are they hiding? Why won't they let Lennox be rehomed in another country despite all the firm and legitimate offers?  We can only speculate as the people of that council are also champions at opacity and imagination runs wild among Lennox supporters.

I guess it is only a matter of time before the truth come out, let's hope Lennox can still be saved.

Karma is a bitch!