Patches and self doubt 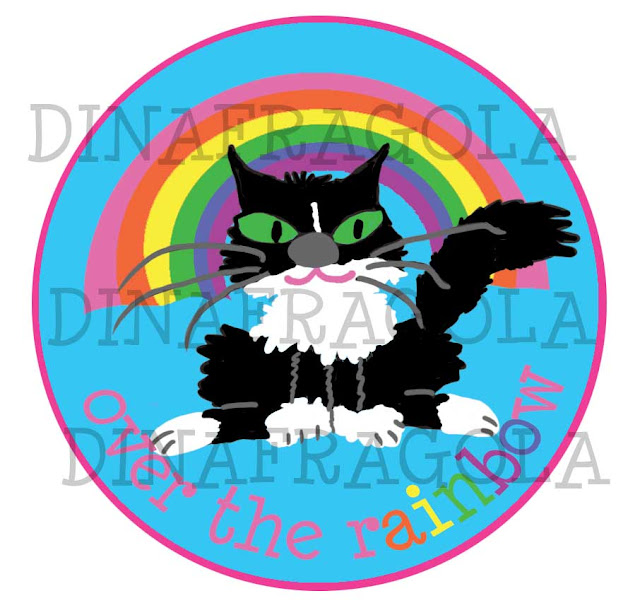 OK. I have ordered my first custom patches. I am super nervous, full of self doubt. Let's face it, nothing I ever did met much success. I am on the point of giving up all together. It's too hot, I am too lonely and just generally very unhappy with my current life with next to zero social interaction.
Warning, going into very personal stuff now...you don't have to read if that makes you uncomfortable.(writing it mostly for myself)

I should get the patches in a month or so. They'll be sold in my DinaFragola shop.
Posted by Nathalie at 2:52:00 PM 4 comments: 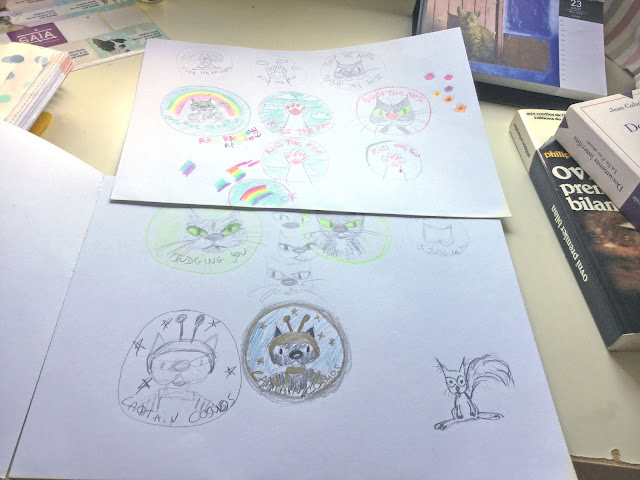 I have been half-heartingly working on a new project. No need to keep it a secret as pretty much no one cares  nor wants to steal my ideas LOL
I was super excited when I first came up with the idea, needed a new graphic tablet (got a Wacom, who would have thought I'd get a Wacom one day...certainly not me).  I installed the softwares I need...and nothing...
I want to make patches. Been searching for a suitable company  but nothing I am happy with so far.  So if you know of a company that  makes custom patches (and maybe enameled pins), let me know. Preferably in Europe, and not the in UK. 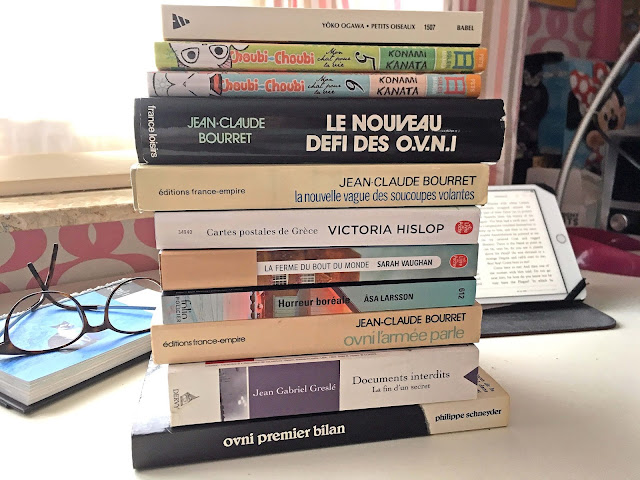 We never heard again  about the middle of the night alarm incident. But sure enough when we went back to the shop everything had been moved around and things were missing.

Some days, when you were really unlucky the boss would ask for help in her office.
You'd just have to file some papers, plastify some sheets...but mainly you'd do nothing at all...you'd just wait there. Not that she was working much either.
Let me tell you about my first afternoon there...I had to file about 20 sheets of paper, which took me about 5 minutes...and I took my time. That's all I did. From 1.30 to 4.30. Meanwhile, my boss made several doc appointments, called some friends, made some online personal payments...that's about it. But, "that was a great work day!I did so much!"
And you should have heard her, how she was compeletely overhelmed by the amount of work she had to do. Worst part, I think she was absolutely convinced she was overwhelmed. But she also knew she was not working much as she would pretend to work when someone else would enter her office.
An when she was actually doing something , it was so slow and so unefficient.  It usually took a whole afternoon to place ONE order...and every single time, she'd close the page without saving and we would have to start over.
My last full day there, we had to check 2 bills we had gotten for the same orders...so we had to compare the 2 lists. I just wanted to do it, quickly, by myself. But nope, I had a sheet, she had the  other...after half an hour (and not much progress) she decided she needed her glasses she had forgotten at home. So she left, just like that...she disappeared for 40 minutes and came back without any glasses.
Thankfully I had my phone.
She had very limited computer skills...her computer would take over 10 minutes to open in the mornin as she never closed any programs. And it was a mess. She never quite understood what a network was either, so she kept "losing"  files. Seriously at first I thought she was joking when she was making stupid things on her computer.
The look on her face when I once told her to "click right and scroll down"...like I was suddenly speaking Chinese. And that time she thought "customer helpdesk" was a person's name...
I quickly learned to never volunteer any help...but sometimes I would just burst out  out of frustration.
And the bizarre things she'd ask for her Excel files...making it obvious she never had any training.
Yet, pretty much everyone seems completely oblivious of what she was really like...she was always being so nice and helpful...
And you know what the scary part is (yes, because there is a scary part)? She was the one in charge of workers safety. She was the one who had to be up-to-date with emergency procedures.
So there was nifty signs all over then place, exit signs, fire alarm signs...But on the other hand, we had only one set of keys for the shop. There were bars on every window in the shop and only 3 doors, the 2 back doors had to be locked all the time, the front one could only stay unlocked during the shop opening hours. 3 locked doors, one set of keys...with 4 people working there we spent half of our time looking for those damned keys...imagine in case of fire...I brought up the problem, no answer...as usual.
Normal from someone who could not understand that a product we received frozen with the mention "has previously been frozen, cannot be frozen again" is a MAJOR health hazard. That was the last fight I had with her, I had to insist and insist (though I was, I didn't know yet,  in the middle of a major infection and battling high fever) for her to call the company who had sent those frozen products to us. And you know, though I was obviously unwell, she had me wait 45 minutes before she called. In retrospect I should have just left...after all, not my problem, not my responsability. But I stayed. She was instructed to destroy the products right away.

I could go on and on about that...but this will be the last installment. It didn't leave me in a good place and the dramatic ending didn't help...
Posted by Nathalie at 2:54:00 PM 2 comments: 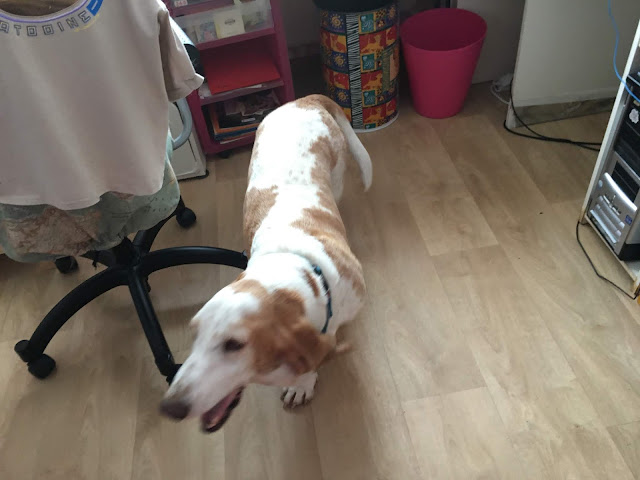 My cousin and her family came for a visit...this is Bailey's the dog. She is an adorable basset hound. 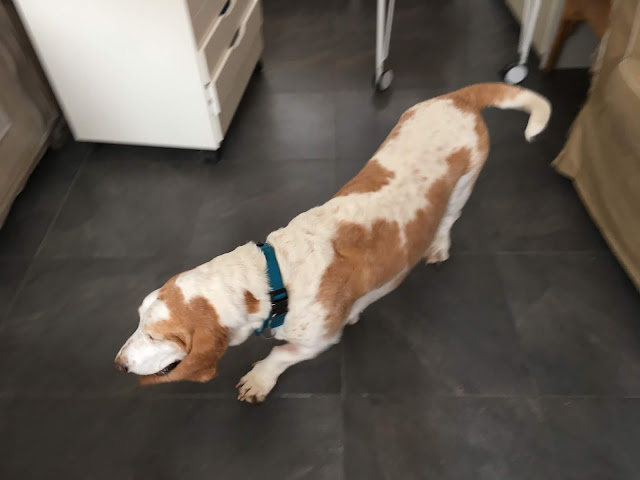 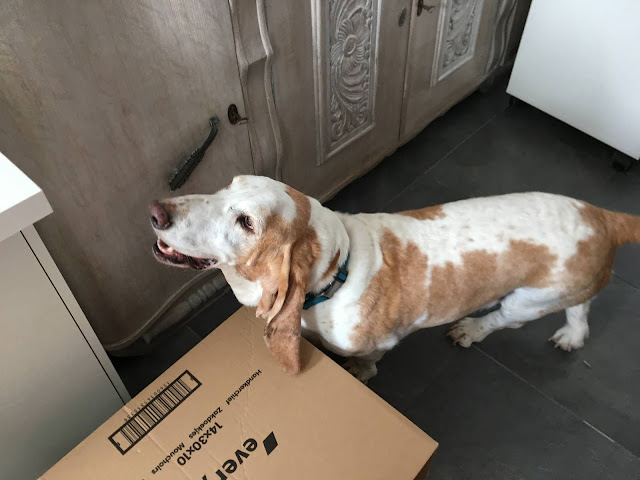 She pretty much inspected every single square centimeters of the house 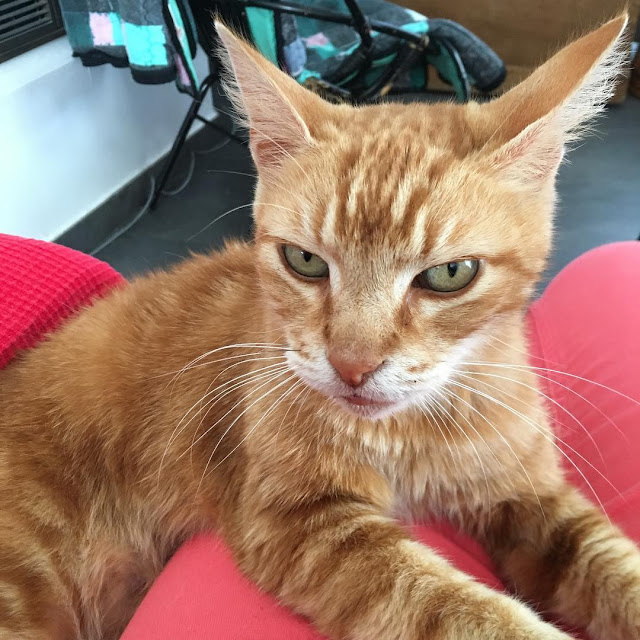 The cats were less than impressed :D
You can see more photos of Baileys in this post
Posted by Nathalie at 5:51:00 PM 2 comments: