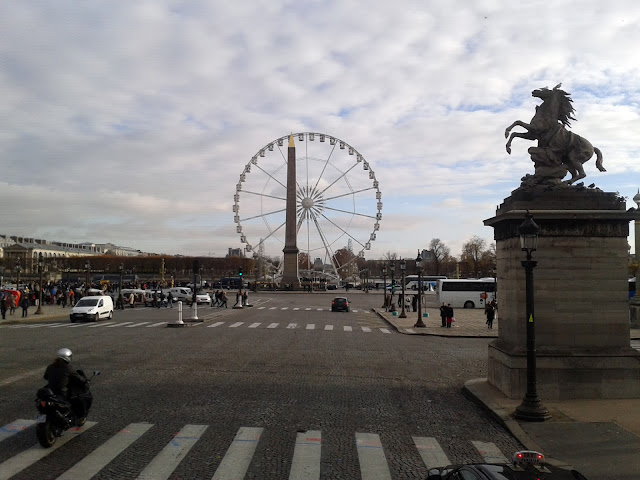 I hate Paris. Well, not really but I thought it'd make a catchy title.
I have always had a love-hate relationship with that city. I live about 2.30 away by car and about 1 hour away by train (TGV) so,  it is not exactly the most exotic place to me.
When I was little my idea of Paris was kind of...well, touristy...like it'd be that place you see in American movies from the 60's. And then I was confronted with the harsh reality. It left me a bit traumatized. We were dropped in front of the Moulin Rouge (tacky ugly to a little girl), ate in a bland looking room and the toilets were what the French call "Turkish toilets"...a hole in the floor.
Yeah, because like many people my first trip to Paris was a one day organized coach  trip. For some reason all of those trips begin in the Montmartre area. I guess most people think it is "picturesque". I don't. First it is not, in any way, in a nice area. Think L.A. South Central , with maybe less street shootings. It is dirty, full of weird people selling weird stuff on the sidewalk, cheap shops...well, it is poor. Then there is Montmartre itself...which is a hill, a steep hill. About 300 steps to get to the top and the Sacré-Coeur. I am never very inclined to climb 300 steps, wherever those steps may be. So now I take the "funiculaire". Yeah, lazy. But at least I am not sweaty and grumpy when I get to the top.
So you up there...to do what? Let's visit the Sacré Coeur. A slightly kitschy not very old church. OK. Done. Then what. Oh, Place du Tertre. Tourist shops after tourist shops, tacky and  bad  restaurants, fake painters selling oil canvas painted by Chinese "artists" who'll never be able to afford a ticket to see the real thing. Don't eat there. Ever. Unless it is just a sandwich from a bakery or something you get at... Starbuck *insert cringing here*.  If you're silly enough to go in a restaurant there, it's going to be expensive and not terribly good...and not necessarily edible either. Most of those places serve industrial frozen food. A coke costs 4.50 euro (like everywhere else in Paris except Mc Donald that is) and your red wine will be served chilled (because that's the way Americans drink it, they say...I am not even kidding).
Yeah, we ate there during my last trip. I was "tagging" along so I didn't dare to say no...especially after my earlier whining at the bottom of the 300 stairs. The food was disgusting. Salad entrée with no dressing. Half unfrozen pasta with cold tasteless sauce. And out-of-date dessert ( it was really no longer edible, the cream had turned sour, the fruits were dry). They don't care. They know you'll only come once anyway. And the toilets were just as gross (recurring problem in Paris it seems).

Yeah Paris kinda sucks :D
Sometimes it's annoying how much strangers are obsessed with that city.