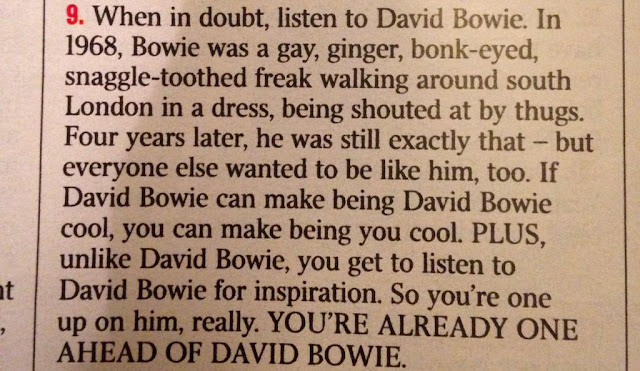 "If you're ever sad, just remember the world is 4.543 billion years old and you somehow managed to exist at the same time as David Bowie." @JeSuisDean on Twitter

Today, as pretty much the whole western world, I woke up to the sad sad sad news of David's death. Yeah, in my world he was just David. It may sound cliché to say but at first it felt like a part of me died too, time to say goodbye to a large chunk of my teenager years. He was one of those persons you think are going to be around forever... How could he die 2 days after releasing a new (fantastic album)? When everybody thought he was finally doing better. But after moping around all morning, I already feel much better. All my memories of him are not gone, all that he was still is somehow. He was the ultimate artist, always ahead of his time, always a visionary. And he was never afraid of trying new things. And he was a nice guy too, always kind and sharing. 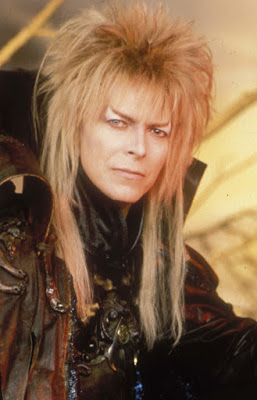 Who else would have accepted to play in a Jim Henson movie, wear an unlikely wig and get away with it? To be the voice of a character in Sponge Bob...and even write a song for the Sponge Bob musical?
All those great memories of time spent listening to him and watching him. All those great memories of my dad bringing me David's latest CD's and DVD's and books on the day they were released...No, my memories are definiteky not gone.

So sad to hear the news today that he passed away. :-(
Rest in peace, David Bowie.

Very sad .... but as you said David Bowie isn't really dead : he is very alive in my memories, he's a part of my life.

I wasn't aware that he passed away. Not a fan of his music but always liked that he was married for so long with the same woman!

Today I mourn with you. Big inspiration. Thanks for the start quote, that is just brilliant!

Sad news indeed! And a great quote that makes you think about originality and how sporadic it is in human history!