Star Cat of the Day : Diego 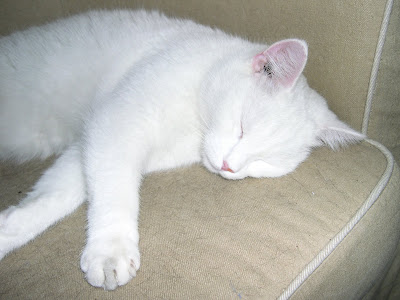 Diego "el loco blanco" Mc Bain is Dora's best friend. Yes, I highly suspect the only reason he moved in when he was about 1 was because he loves Dora so much. I have no idea where he comes from, he just appeared regularly in the garden to lick Dora's head...and one day just stayed. Maybe Dora liked the idea of having a hairdresser 24/24. 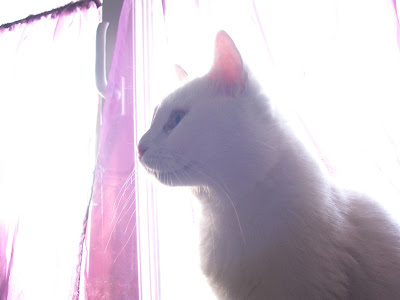 Diego is hyperactive. He is constantly moving thus making it really hard to take a good picture of him.
He is not exactly the sharpest kitty ever, but what he lacks in brain he sure makes up for in sweetness. 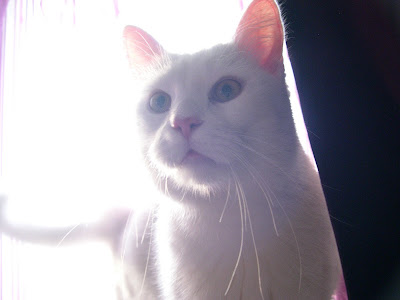 And no, though he is white he is not deaf. I have learned that white kitties with green eyes are genetically black and white cats with just a large white spot .
I called him Diego because it's the name of Dora's cousin in the cartoon...and also because of Zorro, Don Diego de la Vega...for the way he always zooms around the place.

such a beautiful cat; is he completely white ??? not a tiny black spot somewhere hidden ?

Great shots - and what a great story teller you are!

What a cute and handsome cat boy!
Give him some cuddles from us!

Such an adorable kitty boy!!! Thank you for introducing sweet Diego to us! Lots of cuddles :)!

He's gorgeous. You can tell he has lots of personality.