Star Cat of the Day : Daget 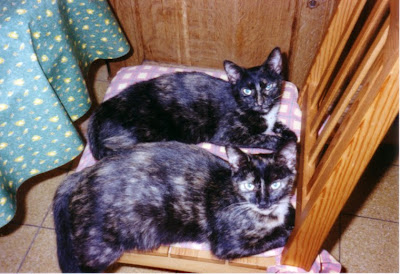 There was once a female kitty named Boudine (Tummy) who was feral and lived in my garden. Boudine was pretty wild and I couldn't catch her to have her spayed. So once in a while she brought me back her kittens. Daget is one of those kittens.
Daget McBain was from a kindle of 4, she had a twin sister Norbert (on the picture above, who sadly passed away a few years ago), a brother called Buffy (who was very wild and died young) and another sister Zouzou (who is still here). As you probably noticed I managed to give boy names to girls and vice versa ;) Norbert and Daget are the names of cartoon beavers. 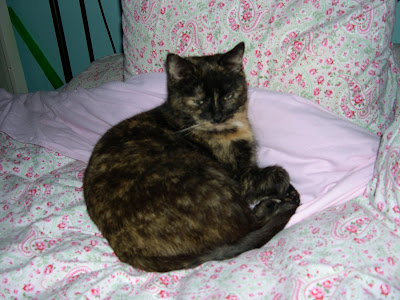 Daget is very shy...and came into the house only because her twin came first. Norbert was not shy at all. Though she lived inside, I couldn't touch her. And then one day she got attacked and wounded by a dog when she was a few months old.
Somehow, while I was looking after her and treated her, she became a bit less shy...and now she is a very sweet kitty. She likes cuddles and snuggles...but only if she is sure she is not in the way...which makes her even more endearing. She is 11 going on 12. 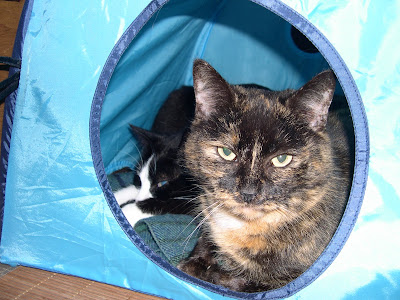 She is a very beautiful one, looking very "ladylike" :)

Awwww I LOVE Daget, she's so sweet!!! I love tortoise shells, Daget reminds me a lot of our beloved E.T. who passed away 3 years ago, she was such a sweet and cuddly kitty... although extremely shy with strangers.
As you love cats, there's a wonderful blog I'd warmly recommend you to check out:
http://consciouscat.net/

She has a beautiful color!
My other cat Ula (you saw his pic other day, remember?) is quite shy and wild too. I love the fact that each cat has her/his own personality.

ahhh Daget is a real beauty ! It's so nice to read this story, because it remembers me of the wild cat that visited my mum every day. She was really wild, but liked to get food from my mum; but was not to be touched. Then she came home with a big wound at her belly; my mum treated her and from then on they were unseparable.

These are very cute cats ! I have a wild one in the garden (we call it a 'schildpadkat' ...) she is also very shy. We catched her this summer to get her sterilised, now she is a bit less shy.

Your kitties are beautiful!

i love so much these kitty biographs!Daget looks very sweet :)

What a sweet story!