Star Cat of the Day : Zouzou 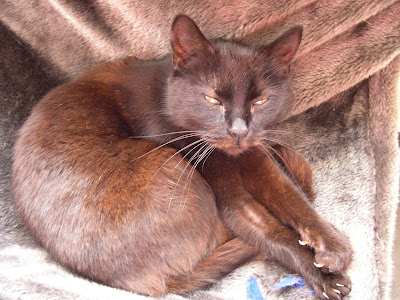 Zouzou Pitchoune McBain is Daget's (whom we met last week) sister.
Zouzou is one strange kitty if there ever was one. Like her siblings she was born feral, and until the age of 1 (and spending a winter outside) she absolutely refused to come in the house, or be touched, or even be looked at for too long.
As a result I couldn't have her spayed, and she had babies when she was 1. Her mom Boudine had kittens at the same time, so I never knew who was the mom of whom from their 7 kittens.
Then, one cold night she decided she liked being inside the house...and that sleeping on a bed was not completely uncomfortable...as long as she was not looked at.
But once inside, and with the use of many kitchen ustensils (long story) I managed to catch her and take her to the vet.
Then she went back to being the wild one...inside ;)
Years later she broke one of her back paws...so I had to catch her again, which was not easier than the first time...And she must have remembered the vet pretty well because once her carrier was opened she jumped out on 3 paws and hid inside the X-ray machine .
And what fun it was to try to get her out. 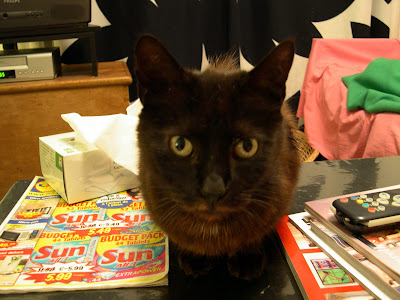 So you have now to imagine me, completely lying on the floor, with my arm stretched inside the X-ray machine...with the vet saying "you'll never get her out, you'll never get her out!"
I got her out!
Back at home, with her paw in a large plastic thingy, she was not any nicer. She escaped, and she bit me while I was trying to get her back. That resulted in a doctor visit and 2 shots for me. I guess she had her revenge ...and she just limped back inside in the evening as if nothing had happened. 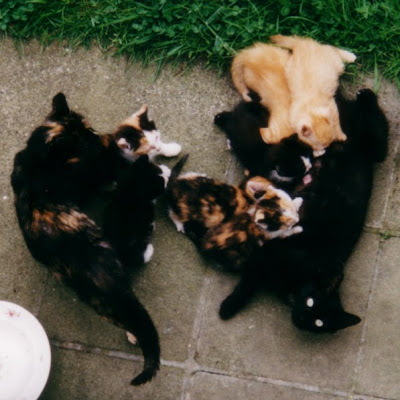 On this last picture, Zouzou, Boudine and the 7 kittens.
But that's not all...for some unexplained reasons, when she turned 8 or 9, shortly after her sister Norbert died, Zouzou, the not-to-be-touched kitty, became Miss Clingy. She now adores hugs and cuddles...and is very vocal too. She also started to tip over all glasses within her reach, something her sister did all the time too.
Posted by Nathalie at 5:27:00 PM

What a story and character :)

Love this cat series, always fun to read about these silly creatures!

Wow, what a story! She really takes care, that you never get bored! :)

Great story and she is so an independent person!

Now there is a spirited lady!

Oh--reminds me of my dear cat--and I almost got teary-eyed!

wow, what a great story. It reminds of a feral cat of my mother, who became very sweet and cuddly when she was old.

Such a beautiful story! Zouzou is sure a girl with a strong character! How fascinating and unique each kitty is...

i laughed so hard!
Great stories about Zouzou, I wonder why she turned out so clingy...