Star Cat of the Day : Eugénie 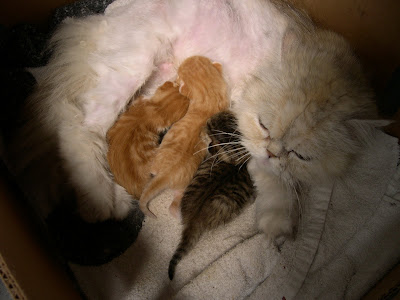 Let me introduce you to Eugénie McBain. Little Eugénie (yes, she may look big but it's mostly hair) didn't have a fun start in life. She is Persian and her previous owners used her as a breeding cat. She was in a house where she was mostly neglected, never being groomed nor much looked after. Over time the previous owners got tired of her and let her out (she was locked inside before that)...and Eugénie found the way to my house...Where she mostly hid in various places. I let her in because she was limping...I quickly found out it was because of a huge tick on her paw. 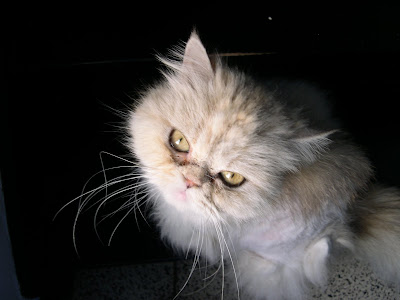 For a while it was like that, Eugénie would come and hide in my house, and the previous owners would come and get her back. As she was not neutered, she had kittens quite often, and the first time she came in my lap was to give birth. When I moved, the previous owners just told me I could have her...though their nasty brat was adamant they had paid for her and that they should just keep her :/ Eugénie gave birth again, on the second night in the new house. On me again...while I was sleeping. That's how I ended up with 3 extra kittens, Bob, Frank and Zoé (on the top picture). 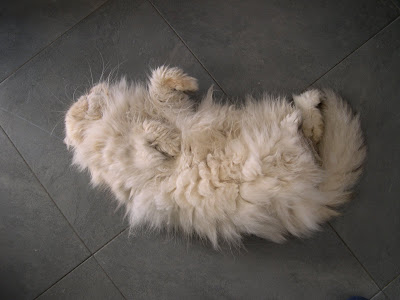 Eugénie stays a very aloof kitty, she never asks for cuddles, never sleeps near me. She hates being groomed so she usually is a big mess of tangled hair in the winter (I shave her in the summer). She is no longer hiding though, now she prefers to sleep on her back in the middle of the room, the more in the way, the better. 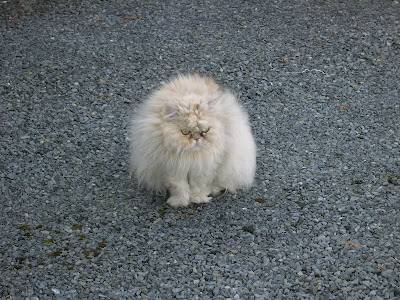 She is neutered now, and though she always looks grumpy I think she must be happy ^_^
Posted by Nathalie at 2:58:00 PM

I love your kitty stories! And I am so happy Eugénie found you!
I have no doubt she is very happy!

Ha, what a character. Love her too !!

She is fluffy, not fat. And persians always look grumpy cause they gots their nose pushed in by the big eye in the skye...

Such a great story again; I remember you told us that she gave birth on your lap. I love the way she sleeps :)

Awwww I am SURE she is happy with you now!!!!!! Poor sweet little kitty... what a beautiful story, she really deserves the loving Home she has NOW with you!

What a furr ball, lol.